Benefits of Yogurt for Health

The benefits of yogurt, which is good for health, have been known for generations in several countries. Foods that are produced from fermented milk 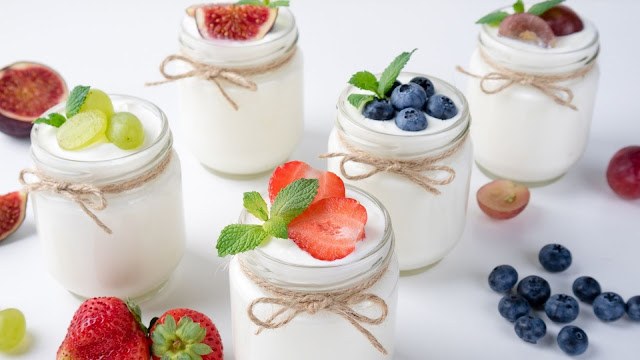 The benefits of yogurt, which is good for health, have been known for generations in several countries. Foods that are produced from fermented milk contain many nutrients that are good for the health of the digestive system, as well as to help maintain weight.

The yogurt itself is classified as a probiotic food. Probiotics, or so-called "good bacteria," are living organisms that will provide health benefits, especially for digestion, if consumed in appropriate amounts.

What's in the yogurt?

Yogurt contains animal protein, which is about 1.5 grams of protein per ounce of yogurt. Also, various vitamins and minerals are abundant in milk, such as calcium, vitamin B2, B12, phosphorus, potassium, and magnesium. There are also some yogurts with added vitamin D.

In the market now, there are many types of yogurt circulating, for example, Greek yogurt. Unlike regular yogurt, this Greek yogurt contains less sugar and more protein.

What Are the Benefits of Yogurt for the Body?

Because it contains probiotics that are good for digestion, yogurt is believed to help overcome digestive disorders. Good bacteria actually exist in the human digestive system. Eating yogurt is thought to make positive changes to the good bacteria in the intestines. As a result, problems such as constipation, diarrhea, colitis, and lactose intolerance can be overcome. However, this row of benefits of yogurt still needs more research to prove it.

Another benefit of yogurt is to prevent osteoporosis. As we know, yogurt contains calcium and vitamin D. These nutrients are micronutrients that play an important role in bone growth. Research also shows that older people who regularly eat yogurt have better bone density and strength than those who don't.

Yogurt is claimed to be able to maintain health by strengthening the immune system. This effect is obtained from magnesium, selenium, and zinc in yogurt, strengthening the immune system. Yogurt is also said to make the body more resistant to infection and speed up healing when sick, especially due to flu virus infection. However, all of this still needs further research.

The benefit of yogurt, especially in maintaining body weight, is that it can make the stomach feel full longer. Eating yogurt can delay hunger longer than other snacks. Therefore, yogurt can be a good food choice for those on a diet or eat healthy snacks.

Seeing some of the possible benefits of yogurt and the minimal side effects caused, including yogurt in the daily menu, should be considered.

Yogurt can be consumed by anyone because it is considered safe, especially for adults with good health conditions. Yogurt can also be given to babies when they are 6 months old.

However, for people with certain health problems, such as lactose intolerance and milk allergy, you should not eat yogurt.

Characteristics of a Healthy Environment and How to Maintain It

Caring For Contact Lenses To Keep It Safe To Use

Benefits of Gamma Rays in the Medical World